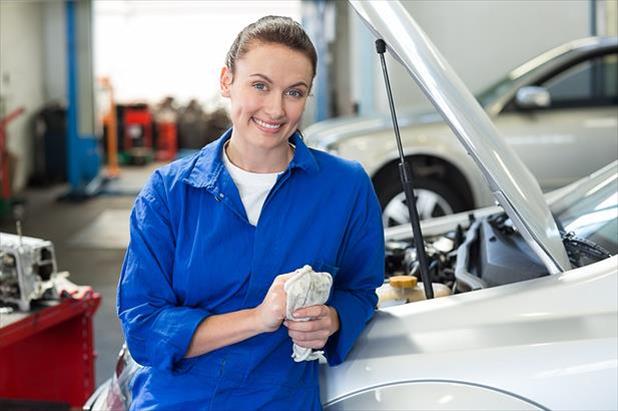 Women and Cars: Driving into the Future

As of 2015, women account for a little less than 2% of auto service technicians and mechanics and only 0.6% of body shop personnel according to the Bureau of Labor Statistics. When it comes to auto manufacturing, women are a bit better represented at approximately 24%, and they also constitute 21.2% of staff employed by car dealers. However, those numbers factor in administrative/non-technical support, sales/marketing, and executive positions, which can be a bit misleading. Yet, as a demographic, women make up 47% of the labor force; they also purchase 52% of all new cars in the US and influence more than 85% of sales. So why are they so underrepresented in the industry?

Automakers and service companies have trouble attracting women for entry-level positions and, indeed, many don’t even try. A 2015 report from Deloitte asked women in the auto industry to rate their company’s efforts to recruit women and only 26% chose the label “very good or excellent.” 76% of respondents also indicated they felt there was an “institutional bias” toward men for leadership positions. It’s hard to increase diversity and expand female representation if potential recruits are not actively pursued, awarded for their contributions, or offered the professional development and career advancement opportunities needed to retain top performers.

Where the car care sector is concerned, the gender disparity is also due to an image problem. The stereotype of the shady mechanic or body shop owner is a popular one, and there are many stories of unprofessional individuals tacking on unnecessary work or inventing non-existent issues to overcharge unwitting customers. The majority of victims in these scenarios are women, and a 2013 survey from RepairPal found that 77% of respondents stated that mechanics are more likely to overcharge women, which was reinforced by a Northwestern University study (it’s important to note, however, that this study also uncovered that women were more likely to receive a discount if they requested one).

Find your next great opportunity. Register with iHire.

Things are starting to change—albeit slowly—and there are a few individuals who deserve credit for helping to steer the auto industry in the right direction. Mary Barra took over as CEO of General Motors in 2014 after three decades spent rising through the ranks as an engineer, plant manager, VP of HR, and executive VP of product design. She credits GM’s focus on diversity as creating the atmosphere that allowed her to thrive and grow in her career. As further evidence that the auto business is changing for the better, Barra points to the fact that there are 2,200 female engineers at GM and five of the 12 members of the board of directors are women. More recently, Michelle Christensen was tapped to lead a design team for the much-anticipated Acura NSX supercar, becoming the first woman to hold such a position. This assignment is even more prestigious considering the fact that the brand is attempting to resurrect a high-profile model that was discontinued in 2005.

The final person who must be mentioned is Patrice Banks, an auto technician and founder of Girls Auto Clinic who quit her job as an engineer to educate other women on car buying, maintenance, and repair. She holds free workshops and is regularly chosen to speak at companies and community groups about the basics of car care. Banks has even offered to accompany women to dealerships to help them negotiate and ensure they get a fair deal. Her repair shop is also staffed exclusively by female mechanics and caters to women car owners.

Although the process has been slow, some progress has already been made and more is likely to follow based on the impact of the professionals mentioned above combined with more dedicated efforts to attract young women to math, science, and engineering subjects. One thing is certain, however: the pervasive sexism that created an environment where women felt unwelcome has begun to dissipate. Many car companies, dealerships, and repair shops are now catering more to women, and there have been a number of steps in the right direction, creating a path that will inevitably lead to better representation of women in the auto industry.

Do you love cars? Are you interested in making it your career? Check out some of the current openings on iHireAutomotiveProfessionals.com!

Sign In or Register to access all articles and insider tips for help in your job search.

4 Types of Cover Letter Introductions to Help You Stand Out

Learn four proven approaches (with examples) for writing a cover letter introduction that will grab employers’ attention and get you more interviews.

How to Become Successful: Your Computer is All You Need

How to File Taxes as a Gig Worker

Can You Hold a Part-time Job While Working Full-Time?

Sign In or Register
to access all articles and insider tips for help in your job search.